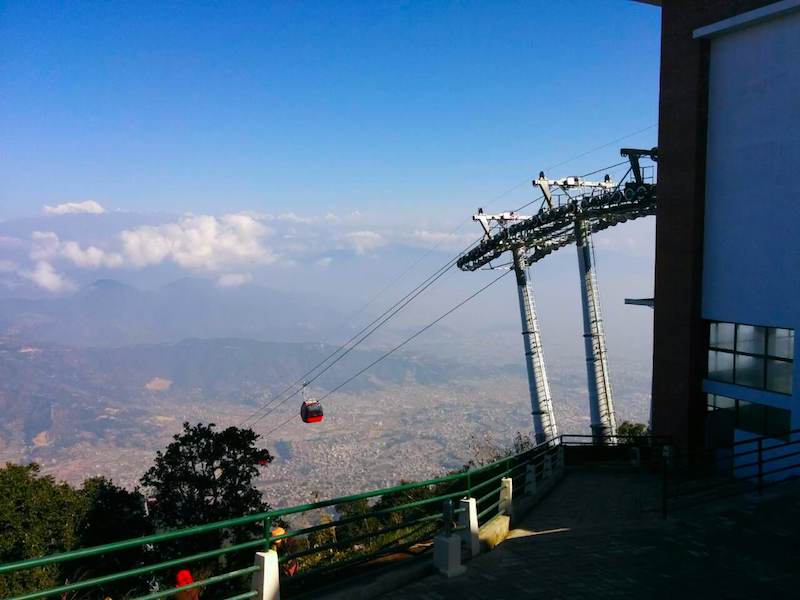 It had been a long time since we went out on a family trip. So, one Saturday, we decided for a trip to Bhaleshwor Mahadev Temple in Chandragiri hill, which is a new tourist destination in the valley to pay worship to god Mahadev, as well as ride cable car.

Even though the weather was not good that day, especially when we were hoping to get a clear view of Kathmandu valley from the hilltop, we still decided to visit the place.

To avoid the crowd, we drove from our home at around 9 am in the morning and reached the destination in an hour, which was possible due to no heavy traffic, even though the condition of the road was not that good.

There were no issues with vehicle parking, as there is quite a big place for it. After taking few photos, we bought tickets quite easily due to the absence of crowd and then we stood in the queue for around 20 minutes before our turn came to get inside the cable car.

The cable car journey was a bit scary, at least for me, because the cable lines are quite steep. That being said, I have to admit that I had a memorable and adventurous 11 minutes cable car journey from the main station to the station close to the top of the hill.

After reaching the station at the top and taking few photos again, we had to walk further few minutes to reach the flat land on the very top of the hill. There, we paid a visit to the temple, went through the manuscript describing the history of the place, had drinks and lunch, roamed around, etc. It was of no use for us but the place even has a children playground, as well as a conference hall. It is a new and good trend in the country, where they have a place dedicated to children. There was still some construction works ongoing, which is expected to be completed in few months’ time, after all, the official inauguration had still not been done till our visit. We actually had our lunch in a restaurant, which also had at the View Tower but sadly, even though it was expected, the cloudy weather did not help us to experience the view of the valley from the top. 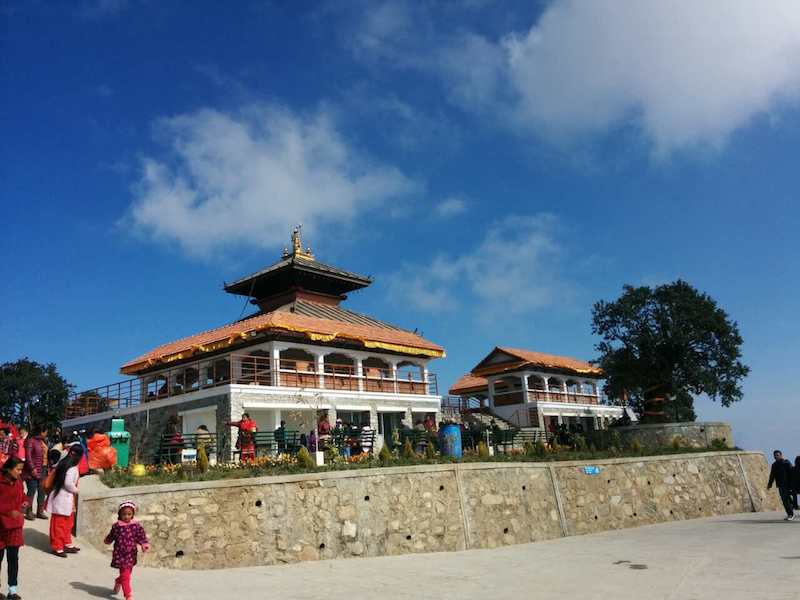 Since we also had some other plans that afternoon, we slowly moved down and took the cable car back to the main station, another interesting journey it was. On our exit, we bought some snacks from the Souvenir shop and finally drove back at 1:30.

There were lots of rumors and gossips complaining about the price at the restaurant on top of the hill and visitors not able to carry food in the cable car but I thought that the prices were quite reasonable for the location and there were quite many people having their own home food in dedicated picnic locations.

Overall, my family and I had a very wonderful experience visiting Chandragiri Hill. It would definitely have been an icing on the cake, had the weather been clear to let us view the valley and Himalayas from the top. I guess there is always next time or another hill for that.