A short trip to Bhaktapur

A short trip to Bhaktapur

After leaving Kathmandu, the scenery is completely changed with green paddy fields and wide roads of Arniko Highway. Covering the distance of 9.8 km, Bhaktapur is 15-20 mins ride from the main city of Kathmandu. The city of devotees (Bhakta: devotee, pur: city) is aptly named for its well-known temples and shrines. Bhaktapur is one of the oldest cities of Nepal constituting of old city traditions and Newar heritage.

The bike ride took us along the Arniko highway which was partially damaged after April 2015 earthquake. Taking a quick left turn from the highway at Sallaghari, we follow the route along the luscious green Pine trees (Sallaghari). Before reaching the Durbar Square, we reached Siddha Pokhari located at the entrance of the ancient city-Bhaktapur. Known as “Tu-Pukhu” in Newari, it is a beautiful pond and is a famous hangout spot for friends and families and couples to spend the quality moment together. The devotees gather in this pond to take holy dips to please goddess Indrayani after the day of Indra Jatra. 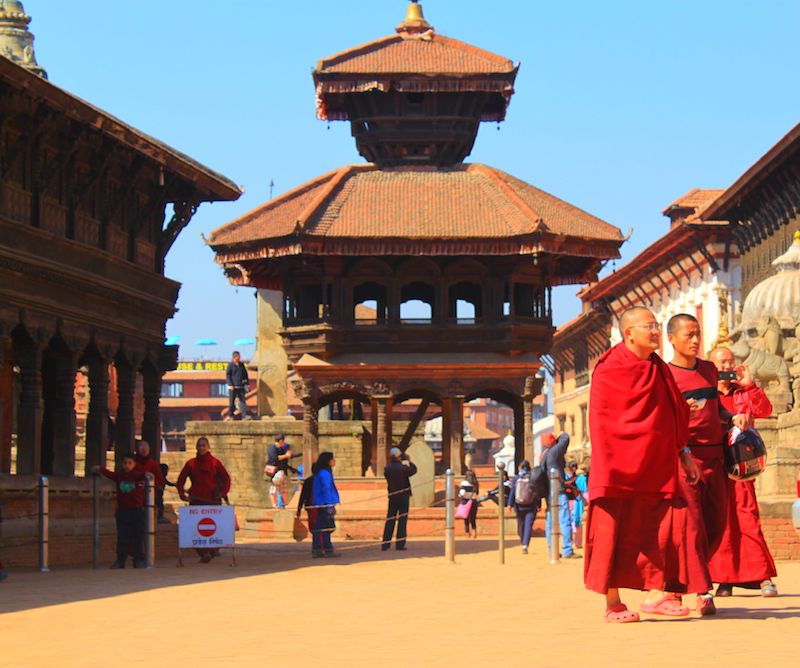 We entered the grand Durbar Square to be completely mesmerized by the architecture and sculptural designs of temples and palaces.

The Palace of Fifty-five Windows was built during the reign of King Yaksha Malla in 1427 AD and was remodeled by King Bhupatindra Malla in the 17th century. Among the brick walls, with their gracious setting and sculptural design, is a balcony of fifty-five windows, considered to be a unique masterpiece of woodcarving. The world famous Golden gate of Bhaktapur is said to be the most beautiful in the entire world. The door is surmounted by a figure of the Hindu goddess Kali and Garuda (mythical griffin). Batsala Temple is a stone temple of goddess Batsala Devi that includes many intricate carvings; however, it is most famous for its bronze bell, The Statue of King Bhupatindra Malla in the act of worship can be seen on a column facing the palace. Nyatapola in Newari means five stories – the symbolic of five basic elements. This is the biggest and highest pagoda of Nepal ever built with such architectural perfection and artistic beauty.

The alleys of the square are like a maze which leads from one square to another. Another major attraction is pottery square where local people make clay pots and handicrafts. The pots are prepared by using the wooden tray where the clay gets its shape and then baked and placed in the sun to dry. It is a finely tuned system of human pottery rotation from this centuries old tradition.

The city is also home to delicious traditional Newari foods and offers an array of Newari foods like Bara, Chatamari, Aalu tama etc. It has many restaurants offering continental foods and coffees. We enjoyed the view of the mesmerizing ancient city with coffee in our hand along with the sunset.

For those having limited time in Kathmandu but are interested in the destination in the outskirts of Kathmandu, Bhaktapur is the best place to be. You can witness the history of this small Himalayan King down and get to know the rich Nepali culture at the same time.

You can either hire a bike from City center or take a public transport from Ratnapark (Near Thamel) to reach Bhaktapur.