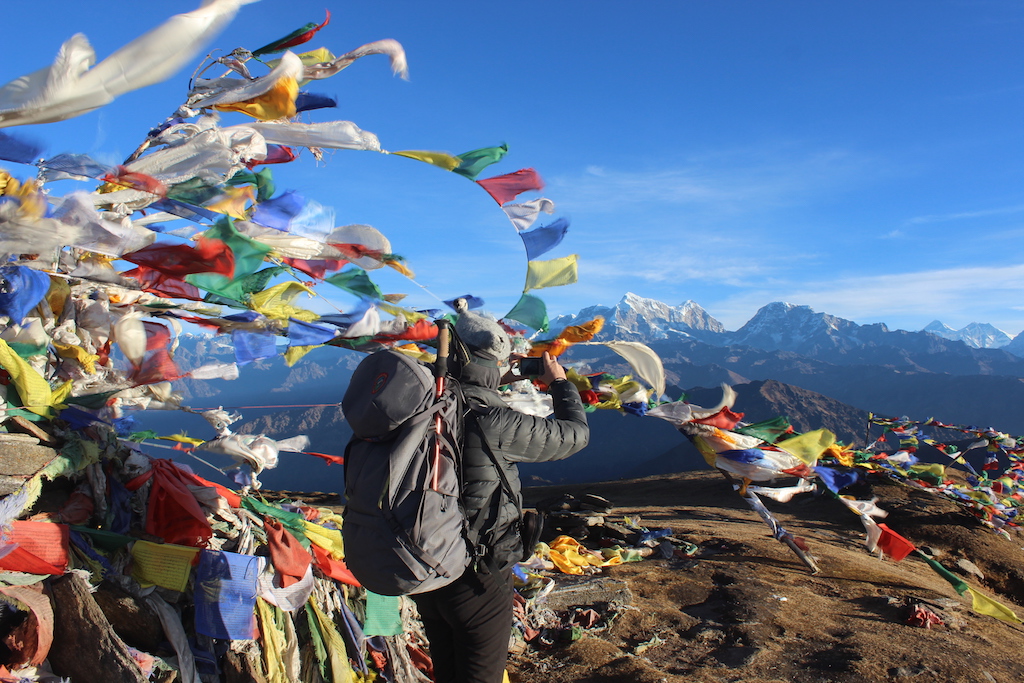 For my second trek in Nepal, I wanted to see Mount Everest.  I didn’t need to be particularly close, and I have no desire to be amongst tourists all cramming themselves into Base Camp, I just wanted to see the highest mountain on earth with my own eyes.
So in late December, I set off again with Khadak as my guide.  Once again I left all the planning to him and enjoyed just following along with the trek he had planned.  We caught the bus from Kathmandu to Jiri arriving there at about 4pm and had time for some fabulous coffee and local donuts before catching the next bus to Shivalaya.  By the time the bus arrived it was near dark, and it was cold and pitch black when we arrived in Shivalaya.  We picked the closest lodge and settled down for the night with hot tea and daal bhat for dinner. 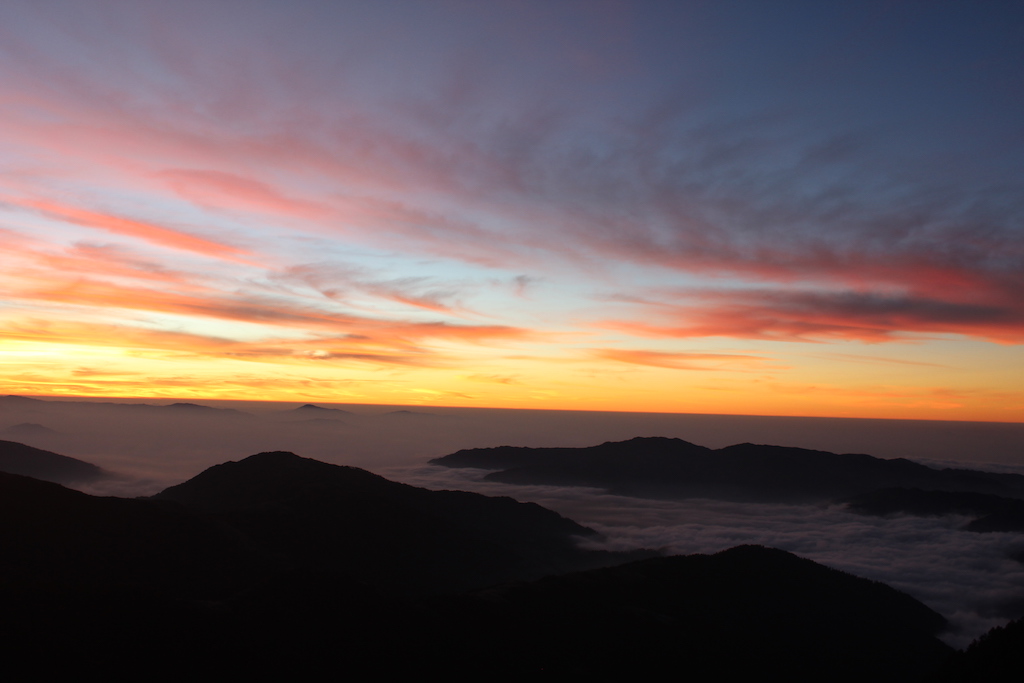 Early the next morning we started hiking.  I had tried really hard this time to pack less equipment to make my bag lighter, but I was not wildly successful as my pack still seemed to weigh a ton.  We stopped for lunch at one of the many delightful lodges and continued on, passing some spectacular scenery of wide open valleys and crystal clear rivers.  There was a tremendous amount of damage to many of the buildings from the 2015 earthquake which was heart-breaking to see.  Not just the damage to such beautiful architecture, but the obvious loss of life and income for the many families affected.
We came to a junction and decided to head up to Pikay Peak.  It was uphill the whole way (unsurprisingly, being a peak) and the going for me was painfully slow but again an amazing experience.  There was no rush and I enjoyed immensely taking my time and stopping to take numerous photographs of amazing scenery and wildlife.  There were monkeys in the trees and we were lucky enough to see a pine marten running right down the middle of the road.  This is where a smaller group, or private guided tour is just perfect – it’s much easier to be quieter and have the opportunity to see so much more wildlife.

The tea-house accommodation was great as usual and we enjoyed many delicious cups of hot tea which were perfect, because of course the increase in altitude means a corresponding decrease in temperature.  My room in the first tea house was under the eaves and the roof sloped so low that I couldn’t stand up – not particularly important when all I wanted to do was curl up under two thick blankets and go to sleep.  One of the panes of glass in the tiny window was missing and as I drifted off to sleep I could see the stars twinkling outside.
We passed herds of Yak, which I find just delightful – and much smaller than I thought they would be – and saw local farmers drying millet on huge mats outside their homes and threshing grain with bamboo threshers.  A tiny Tibetan Mastiff puppy came galloping up to us barking madly and practicing his guarding skills for when he gets bigger – but at the time I met him he was so tiny and cute that I couldn’t resist tickling his ears and scratching his belly.
We came to a Yak cheese factory (or should I say “Nak”, because the females are Naks and the males are Yaks) which although it was closed for winter because the Yaks had gone to lower pastures, but the owner made us welcome and offered us tea while I asked many questions which were kindly interpreted by Khadak.
The higher we got, the more the forest changed and the mosses and lichens were spectacular in their drapery effect on the twisted limbs of the trees.  And then we came to frozen streams.  I have never been anywhere cold enough before where the streams have actually frozen over, with a myriad of icicles and natural ice sculptures formed as the rushing water slowly froze solid.  The final ascent to the last tea-house below Pikay Peak was tough and incredibly cold.  I don’t think I’ve even been that cold in my life and was eternally grateful for my down jacket, woolen mittens, hat and windproof trekking pants.  Photographing the sunset was spectacular and nothing on earth beats the scenery in Nepal.  Watching the mist settle in the valleys below us was spectacular.  That night after a dinner of Thukpa, which is truly divine, we went star-gazing and the night was so clear we had a perfect view of a sky punctuated with a million stars and there above us glowing in a surreal misty strip was the Milky Way.
The following morning we got to the top of Pikay Peak, which is not that far from the tea house at all, but seemed to take me ages to get up there!  Once again we seemed truly blessed with the weather which was clear blue skies without a single cloud.  And there she was in the distance – Mount Everest, looking truly stunning and surreal.  We spent quite a while on top of the peak taking in the incredible scenery and the panoramic views of so many majestic mountains, it was a perfect photo opportunity and not something I wanted to miss. 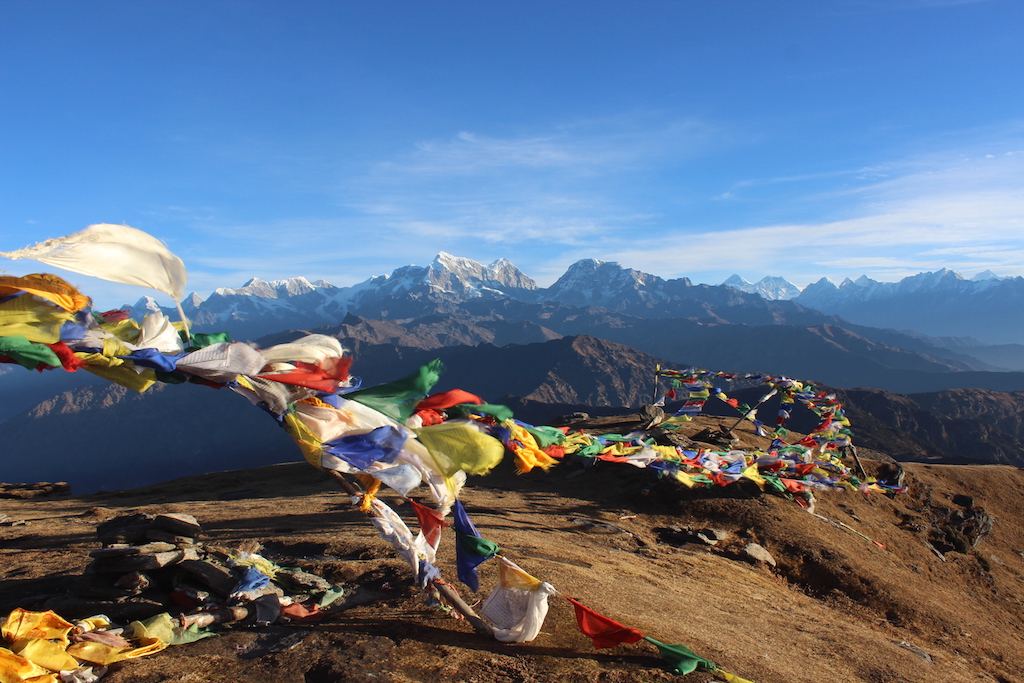 The descent was amazing, very rocky and in places the trail was very hard to follow but I’m never in a rush when I’m trekking and prefer to take my time so it suited me well.  The change in the climate once we got into the forest again was marked and descending into the valleys was stunning.  Hiking through to Junbesi was a lovely hike, trekking through picturesque valleys dotted with tiny homesteads.  Arriving in Junbesi we stayed at the Apple Orchard Guest House where the food was amazing.  I also saw my very first group of pack Yaks carrying goods.  The following morning we hiked up to the monastery in the older part of Junbesi and were able to look around the amazing architecture and beautifully painted woodwork.  We were welcomed into their prayer room to sit quietly which was a wonderful experience.  I wanted to close my eyes and just listen to the calm voices chanting, but the interior of the room is carved and painted in such detail, with beautiful silk tapestries and paintings adorning the walls that I couldn’t take my eyes off them.
In the afternoon we hiked through to Phaplu, which was a beautiful hike through countryside and local villages. All the children shouted out “Namaste!” as we passed and we saw local farmers ploughing their fields with their water buffalo.   In Phaplu we stayed overnight at the Everest Hotel which is a pretty grey stone building with a huge amount of brightly coloured flowers in pots out the front.  It was welcoming, the rooms were huge and the food was amazing (again.  ALL the food was ALWAYS amazing!).  Khadak arranged bus tickets the following morning back to Kathmandu, so at 6am the next day we got on a minivan and bussed back to the city.
It was another wonderfully enjoyable trip and for me, not having to arrange a single thing is just perfect.  I just want to enjoy the experience and not have to worry about day to day things.  And going trekking with Beyul Travel and Treks and such an experienced organised guide is just the way to do that.
Previous postMardi Himal Trek November 2017
Next postA short trip to Pokhara with my gang