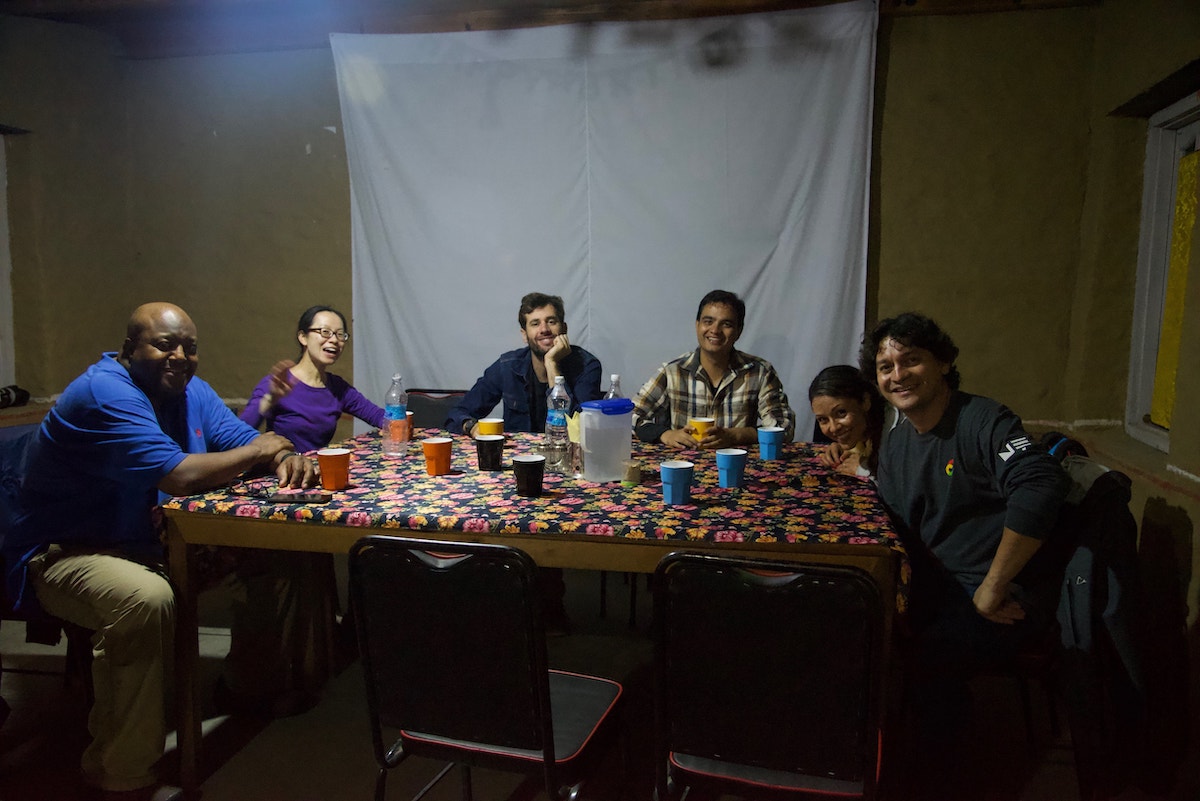 Google is one of the big tech companies. Beyul was given a big opportunity to host people from this company, thanks to GridAlternatives. We were more than excited to greet these wonderful people from another side of the world. Together, we were about to install solar panels at Jodhgaun, a remote village located in the Jumla district of Nepal.

Participants began to arrive from 21st September. That day we just explored around Thamel, a vibrant city in the middle of Kathmandu. We got to know about each other and had a chance to introduce Nepal. They were having a good time in this Himalayan country. During lunch, we started to get closer and even friendlier, Thanks to Gorkha Beer. 🙂 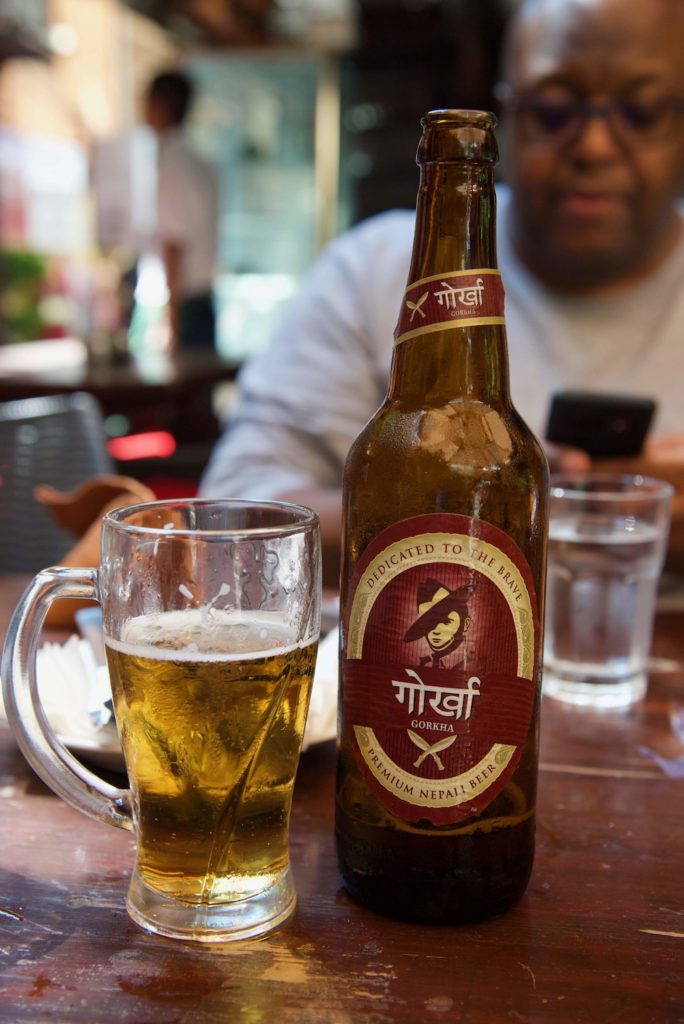 On the second day, we were about to take a city tour around Kathmandu, the city with 7 UNESCO Heritage Sites. After breakfast at the hotel, we drove for Swoyambhunath, the Buddhist shrine with lots of ancient architecture. We could see the whole Kathmandu from the top of the hill. We saw lots of monkeys at the shrine.

We had lunch at Patan, and we were expecting Winnie to join us, she was arriving that day. Roshan drove Winnie from hotel to Patan, and there it was, every participant excited for the next day’s trip. After exploring Patan a bit more, we went back to the hotel. That night we went to a local cultural place for dinner. The incredible cultural dance shows were simply amazing and moving. While at dinner, we were informed about the uncertainty about the flight from Nepalgunj to Jumla. However, with confidence that everything will be managed, we got ready for the trip.

On the 23rd, we left Kathmandu after breakfast in the hotel. We landed at Nepalgunj, a 45-minute flight from Kathmandu. We took our luggage. I started checking for the flights to Jumla. As there is only one flight from Nepalgunj to Jumla, the flight that was canceled the other day was pushed for that day. And, the same plane had to take other pending flights from that day, we were still not sure about the flight. And, due to the “exact” amount of days, we were working on every possible way to make the flight happen. Beyul team began checking for alternate flights.

In the meantime, we took a ride around Nepalgunj in a tuk-tuk.

Despite the pressure to reach Jumla, we were enjoying the ride. The flatlands, horse-drawn vehicles, and the locals waving hello to us, we did not get time to get bored at all. We ate lunch in a local place. Still, the flight was uncertain. While we were still eating our lunch, we got a call from an airline. One of the planes will be flying us to Jumla. phewww!!!!

Finally, it was happening, and it was only after I was inside the aircraft, I believed that we were flying. We were informed about the “not-good” weather condition at Jumla by the hostess. The turbulence just before Jumla is something that will stay in my memory for a long time.

We arrived at Jumla. Khadak, Nepal coordinator for Grid Alternatives,  along with few local people from Jumla was there to welcome us. We could not be more happier. After settling down at the hotel, and eating some yummy millet pancakes, we went out to hike around the village. This small idyllic village was looking so gorgeous with hills around, and a big valley covered with paddy plants. We got back to the hotel and after freshening up, we started chatting for some time.

For dinner, we ate more locally grown vegetables and rice. We did not miss to eat momo there also. Most of the participants had already fallen in love with the taste of momo.

We went to bed at 8 and made ourselves ready for the next day’s trip to Jodhgaun. The next day, we hired two jeeps and took a long ride. The view during the ride was so awesome that most of us stayed at the (trunk), and enjoyed the view.

The clear river flowing alongside, picturesque landscape and fields covered with paddy, millet, and corn, I was having one of the most amazing road trips. I could see that smile in everyone’s eyes, all of us were having so much fun. We did not miss any chance to take photos along the way.

We hiked for about an hour to Jodhgaun. We could see lots of apple trees along the road. Local people were waiting for us while playing some local musical instruments. We were blessed with a TIKA on our forehead, and many garlands around our neck.

The participants felt very touched and appreciated such a warm welcome. We already felt like we were one of the villagers.

We began joining the local dances as well while walking through the village. We arrive at the site, where solar panels were about to be installed. We met staff from Ghampower, and they began presenting about the panels and how they were about to be installed. After that, we hiked down to the school. There was a cultural show to welcome us. We joined them and began dancing with the local children while sharing some smiles and moments. Everyone felt so immersed in the show organized by local people. We were having the best day. Xavier learned dancing with a local student. The THANK-YOU song that the students wrote was really moving.

Then, we started walking to the site and began helping in the installation. The professional staff from Ghampower were really helpful. Before dusk, we completed the installation and inaugurated the system. We could see happiness in local people’s faces. This sustainable project was sure to benefit the livelihood of Jodhgaun people.

We stayed in tents that day and had a very good organic dinner cooked at the school. After dinner, we made a campfire and stayed there for some time chatting and reflecting on the project. We started sharing more about ourselves and shared some laughs.

The next day, local people thanked all participants and partners for the projects. We then waved goodbye to the villagers. All of us were in a mood to hike, so we hiked for about an hour while exploring the local birth center.  We then caught the jeep and drove back. We arrived at Jumla Bazaar at around 2. I wanted to hike around, so, asked the participants if anyone wants to join. Carlos joined the hike, and we hiked to the top of Jumla Bazaar, where the view was just majestic. We spent some time there and savored the view.

We returned back to the hotel before it got dark. At the hotel, we ate more millet pancakes and spinach. Most of us were already so much into that pancake that I can feel the taste now.

We went to bed early, and prepared for the next day’s flight to Nepalgunj first and then to Kathmandu. The next day, the flight got delayed from Jumla, thanks to uncertain and unpredictable mountain weather. We arrived in Nepalgunj at 5, ate some samosas again which we ate a lot while we were there the first time. We then got a 7PM flight to Kathmandu and arrived at the hotel.

All of us went out for dinner. We had a few last BEER together, said goodbye. I wished to meet these wonderful people again in my lifetime. Thank you guys for the amazing time.